My Dry Cleaner Is Not on Facebook, But He Rocks Social Media 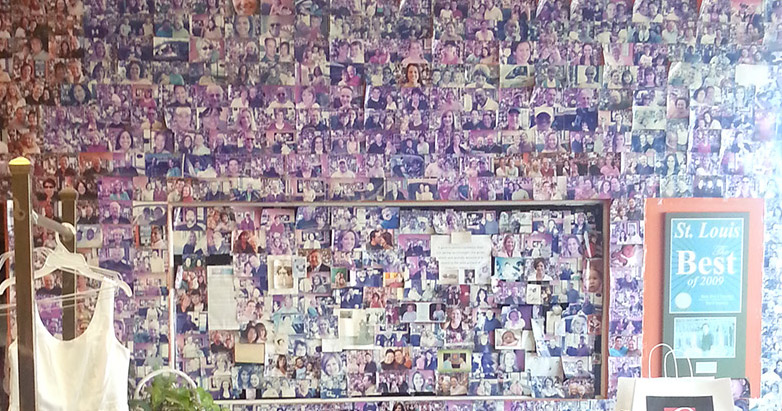 The original “customer wall” at Yes Cleaners. My photo is just above the green chair.

My dry cleaner is Mr. Jong Park. I don’t say that lightly. I have never called any of the other people who cleaned our shirts “my” dry cleaner, but I do feel loyal to Mr. Park and I have since the day I first walked in the door.

How did that happen?

The first time I dropped off my laundry at Yes Cleaners, a new dry cleaning location, Mr. Park asked if he could take my picture. Actually, I was with my daughter, and he asked if he could take a picture of the two of us for his wall. I’m not talking about his Facebook “wall.” I mean his actual wall. There were about 20 pictures of his customers on the far wall of his store. So Sarah and I stood together and smiled and he snapped a few pictures with his camera.

When I returned, Mr. Park gave my laundry and a picture of me and my daughter to me. He pointed to the wall and told me to look for the other copy of the picture. There we were, smiling among his other customers, looking proud to be on his wall.

A few months later, I had my two youngest boys with me when I picked up my laundry. “Ah, you have boys,” said Mr. Park. “I have three,” I said. “These are my two youngest. My oldest is at lacrosse practice.”

“Let me take your picture with your boys then.” And so he did, and the next time I returned, there was our picture on the wall not far from the picture of me and Sarah. Once again, he gave one to me to take home.

My husband picks up the laundry too, and one Saturday he came back from Mr. Park’s store with a picture of him and my oldest son, Matt. When I returned the next week, I noticed that the far wall of Mr. Park’s store was almost full, and I joked that he would have to start another wall soon.

Every time I go to pick up my laundry, I look around the room while Mr. Park retrieves my clothes and notice how the number of pictures has grown. Almost every wall is covered now with pictures; old couples and young couples; moms with young children; grown children with their parents; and now Christmas pictures, birth announcements and wedding pictures that his customers have given to him. It is fun to look around and see all the people on the wall. It’s amazing to see how many people I know.

Even though Mr. Park isn’t active on social media, he has nailed it when it comes to “social” goals. The wall behind the cashier is the most recently bedecked with photos.

First, he created a community. There is only one time that I have bumped into someone I know in the last five years at his location. I’m there for just a few minutes so the chances are pretty slim that I would actually run into one of my friends while I’m there. But I do recognize that Mr. Park cleans the clothes of lots of people that I know because I see their pictures on the wall. We’re all a part of the “Yes Cleaners Wall Groupies,” and proud to be so.

Second, he’s building his reputation through referrals. We’ve all given an implicit recommendation of Mr. Park’s services just by being on the wall. I figure if he’s cleaning the clothes of all of my friends, plus all these happy strangers (enough to fill four walls!), he must be doing a great job.

Third, we have a relationship. From the moment that he took that first picture of me and my daughter, he showed me that he wanted to know about me. Through the years, he has shown that he wants to know about my entire family.
Fourth, he delights me with his customer service. I’m not sure how he does it, but Mr. Park has never asked me for my phone number or my name other than on that very first day. As soon as I walk in the door, he types my phone number into the keypad and the conveyor belt starts spinning and my laundry comes whizzing into view. I don’t know if he has a special gift for putting names with faces or if he uses those pictures to cram each night to memorize the names and numbers of his customers, but I feel important and remembered every time I walk through his door.

Through social media, we have the same opportunity to build community, build our reputation, build relationships with our customers and serve them well. Sometimes, though, we get so caught up in the “do’s and don’ts” of social media that we forget why we’re there. The next time you are engaging with your customers on a social network, think of Mr. Park and his wall and keep it simple. It may be easier than you think.

And remember that the value that you give to your customers can sometimes come in unexpected ways. That picture of Matt and my husband is tacked to the bulletin board of my kitchen. I stuck it up there right after Matt went away to college. And the one of my daughter and me…well, I gave that to her and she put it on the inside door of her armoire in her bedroom. She looks at it every time she’s choosing what to wear.

Thanks, Mr. Park, for being much more than just my dry cleaner.